South African artist Tienie Pritchard, one of the most prominent South African sculptors, became internationally renowned for his bronze monumental public commissions. The nine meter high George Harrison in Settler’s Park, Eastgate, Johannesburg is one of the biggest and best-known bronze monuments in the country. The Water Nymphs at the Aventura resort in Bela Bela (Warmbaths) stands six meters tall. The Wall Panel, depicting South Africa’s participation in World War II, in the commemorative museum at Dellville Wood in France, measures an imposing three meters high by ten meters long. His work is represented in private and public collections all over the world. His subject is the human figure, portrayed nude or semi-nude and, although he also sculpts animals, he prefers to incorporate them into his compositions with human figures.

Ever since Tienie had discovered clay as his preferred medium, it was his greatest challenge to sculpt the nude human form. Throughout his career, the nude was his passion and the basis of his creative motivation. To Tienie Pritchard the nude is not only a subject of art, but in fact a separate form of art. The human body is rich in associations and when it is turned into art, it can be expressive of a wide range of concepts. He is convinced that he can capture the human form in three dimensions only by means of the classical realistic style. To him sculpture is all about form. He studied anatomy by assembling the human skeleton and by familiarizing himself with every muscle in the human body. 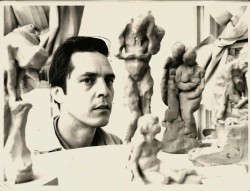 1970: Tienie in his studio surrounded by clay studies for the Life Cycle sculpture group. 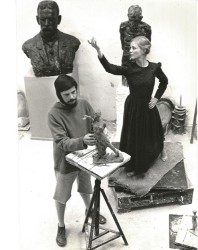 1976: Tienie working on the maquette for the film ‘n Beeld vir Jeannie 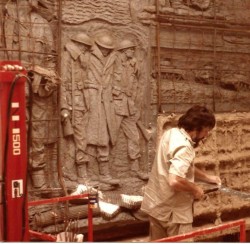 1984: Tienie taking waste moulds of his panel about World War II for the Delville Wood museum in France. 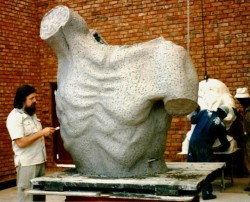 Tienie finishing the clay torso of the George Harrison – 1986 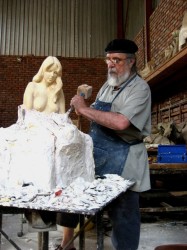 2006: Tienie chipping away the waste mould of a figure from The Marriage Market. 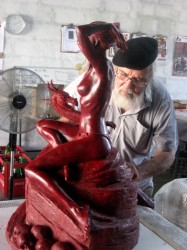 2012: Tienie touching up the wax cast of The Lorelei at the bronze art foundry. 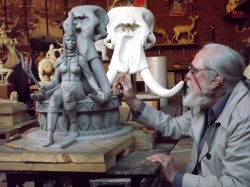 Tienie with the completed clay of The African Queen – 1914

With his very first public commission in 1972, he followed his heart and sculpted a composition of nude figures representing the human life cycle for the Department of Internal Affairs in Pretoria. Nude sculpture sponsored by the government was unheard of and unacceptable for the conservative section of the South African public during those years. Nudes were deemed detrimental for public morals and inappropriate for public display. This protest catapulted Tienie Pritchard on a controversial but very successful sculpting career.

The challenge to portray man beyond his physical reality initiated Tienie’s interest in ancient cultures and civilizations and inevitably the mythologies of these cultures. His later nudes portray the nude within a cultural milieu and shows how the mind functions within a given cultural background. Tienie honours and illustrates the human imagination.

Primarily known as a sculptor of the nude, Tienie sculpts both male and female. However, he prefers the female form, which is better suited to his smooth polished finishes and subtle modelling technique. Tienie regards the classical Greek sculptors as the greatest masters of realistic sculpture, unsurpassed even in modern times. He is intrigued by the ancient female role of goddess, priestess or sorceress – a phenomenon that vanished in modern times. Other favourite themes are heroic and controversial historical figures (Ndlovunkulu (Shaka), Jeanne D’Arc, Cleopatra, Salome), regality (Shaka, The Royal Hunt, Cleopatra) and the vulnerability of man (Vulnerable, Forsaken, The Five Foolish Virgins, The Marriage Market, Back to the Womb, Search for Wisdom, Despair).

Tienie Pritchard models his sculptures in clay and cast them in plaster of Paris. The plaster cast is worked further to obtain the desired surface for his polished bronze sculptures. Limited editions (not more than 15) are then being cast in bronze.

Tienie always use live models, because he believes that working from live models gives soul to a sculpture. Tienie Pritchard’s bronze art hails the human spirit.