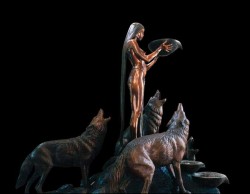 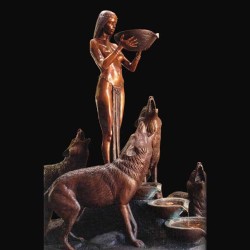 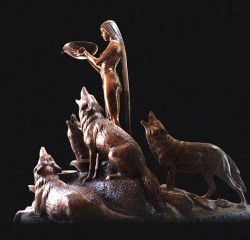 The fountain of the wolves is a portrayal of a ritual performed by a princess of the Wolf Clan before the commencement of the hunt. Before the domestication of animal, man and wolf were dependant on each other for survival, combining their instincts and expertise to ensure a successful hunt. The domestication of animals resulted in the wolf becoming the enemy of man when the safety of his livestock became threatened. A bounty was declared on the wolf, which lasted up to 1965. It was eventually lifted as wolf numbers started to decline and the survival of the species became endangered.Since then campaigns have been launched all over the world to re-introduce the wolf into the wild.