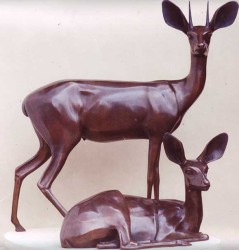 STEENBOK PAIR – 1986
LIFE SIZE
SERIES OF 15
In 1970, Tienie sculpted a steenbok pair which was erected at the entrance of the building that housed the National Film Board.  The plaster of Paris cast was destroyed afterwards to make room in Tienie’s studio.  When we were unable to locate the original bronze sculpture, Tienie decided to recreate the composition and sculpted a new pair, differing in style form the original pair.  The new pair was sculpted in a stronger realistic style than the first pair.