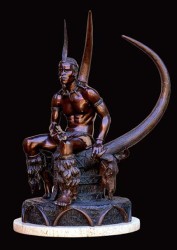 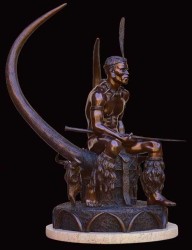 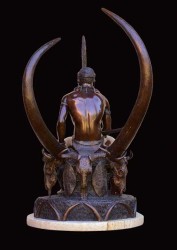 Ndlovunkulu is the name given to Shaka, King of the Zulus, by his underlings. Shaka reigned the Zulu people in Africa in the nineteenth century. The sculpture shows the king seated on his throne at the height of his power in 1820. In his right hand he is holding the short stabbing assegai called the iklwa, a name given to imitate the sound that was made when the weapon was withdrawn from the body after the victim had been stabbed. The assegai was designed by the king himself and was to replace the old fashioned throwing assegai. Shaka is wearing his ceremonial dress with the common leg trappings that was made from ox tails. The blue crane feather on his head was worn exclusively by the monarch and served to make him recognizable whilst engaged in battle. In his ears he is wearing ornaments made from dried sugar cane. They were let into the lobes of the ears that had been cut to admit them. The elephant tusks shown on the throne serve as a symbol of prosperity. The wildebeest skulls were displayed as a sign of recognition and respect for their ancestors.