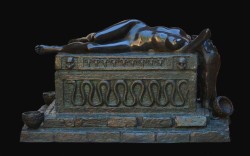 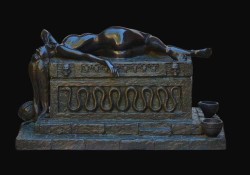 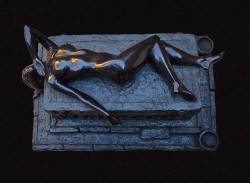 Throughout history man has unquestionably believed in the existence of an unseen world, parallel to his own, peopled by gods and supernatural beings that controlled his life. Sacrifice was a means of communication with these powers, an expression of his subservience and respect. Life on earth was seen as a sacred whole, which was continually renewed by repeating cycles. In order to maintain this never-ending renewal, sacrifices were needed to regenerate the power of the life source. Life was believed to be fed by life. Of all the worldly manifestations of life, the human was regarded as the most valuable and therefore the most efficacious as an offering. Blood was regarded as the life force itself and the shedding of blood therefore was symbolical of renewing life – not ending it. Blood soaked into the ground was believed to fertilize the soil, making the crops grow. In times of crises like drought or famine it was considered necessary to woo the gods with a sacrifice in order to wipe out offences and restore the relationship. The act of human sacrifice might be best understood as a compensation for the feeling of impotence in the face of forces that cannot be comprehended or controlled. It is an unconscious defense against fear. The slaying of the victim is done to vindicate an idea and to save the sacrificer, because the death of the victim substitutes his own death. Chosen victims regarded their selection a great honour, because not only were they elevated to the status of saviour, but they were also assured of blessed afterlife. The same principle still lies behind contemporary acts of terrorism. Kamikaze pilots in World War 11 and people arming their bodies with bombs in the Middle East are examples.