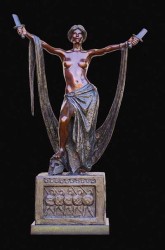 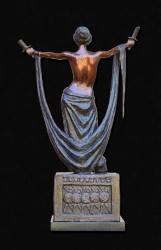 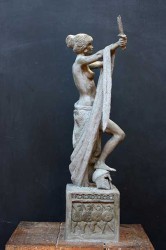 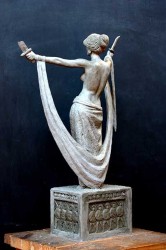 Inspired by Lysistrata, one of the few surviving plays written by Aristophanes and originally performed in classical Athens in 411 BC; this work depicts women’s resistance through the ages against war, violence and abuse.
This sculpture is modelled in the ancient Greek idiom, but she also becomes a universal symbol for women of all ages. She is campaigning for peace and goodwill by denouncing the symbols of war and violence. Women are the custodians of family life and a healthy society. Although they do not necessarily succumb on the battlefield, they regularly become victims of war, violence and the abuse occasioned by it.

« People Of The Kalahari Return To The Womb »