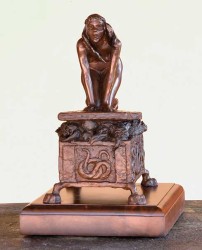 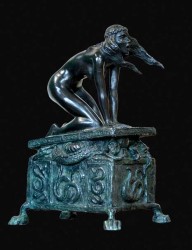 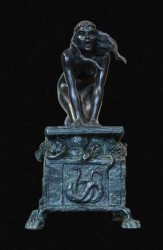 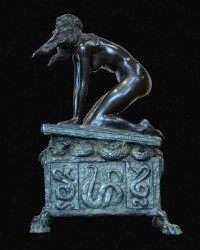 PANDORA’S BOX (2003)
DIMENSIONS:  300 MM HIGH X 160 MM X 200 MM
SERIES OF 15
In Greek mythology Pandora was the first mortal woman on earth and the source of all human miseries, because in spite of Zeus’s specific warning that it is prohibited, she could not contain her curiosity to open the mysterious box he gave her.  Unbeknown to her, the box contained various evils and miseries which then escaped into the world.
Tienie depicted Pandora desperately trying to close the box again, obviously in vain. The subject here is once again a powerful and controversial character, whose vices everyone can identify with.