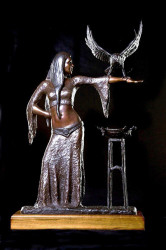 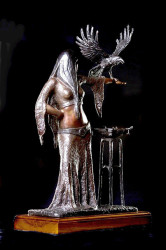 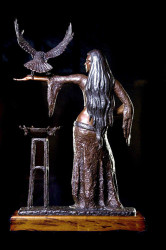 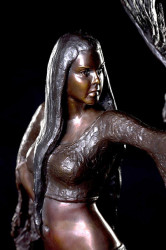 Morgan le Fay is a multidimensional character with her roots in Celtic mythology. Since her conception in human consciousness, her character has evolved from benevolent goddess to sorceress to wise woman. Tienie’s Morgan le Fay is the half-sister of King Arthur of the round table. She is an enchantress, a healer, a persona from the fairy realm with the power to perform magic. She learns her magic from the famous Merlin. The raven on her arm is her scout that she sends out. He flies around the world and reports back to her, informing her of everything she needs to know. The raven is a popular creature in ancient mythology. It is an extremely intelligent bird, bigger than the crow, only to be found in the northern hemisphere. Morgan le Fay has touches of evil and she uses her magic to plot against King Arthur and the Knights of the Round Table, but she is also the one who takes Arthur to the magical isle of Avalon when he is mortally wounded. There she tends to his wounds, promising to use her healing power to restore him to life. Tienie‘s daughter Milla posed for this sculpture. She chose to be portrayed as Morgan le Fay, because of the interesting duality in Morgan’s character, her healing power and her resourcefulness