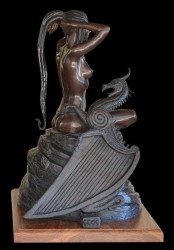 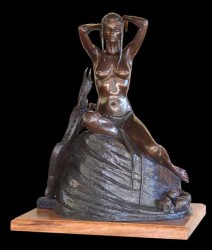 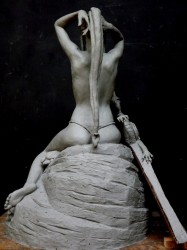 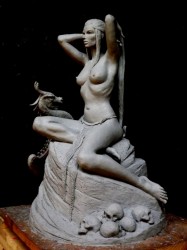 This sculpture is Tienie’s interpretation the siren-like water spirit that, according to legend, haunted the Lorelei rock on the eastern bank of the Rhine near St. Goarshausen in Germany. She was consequently named after the rock. The Lorelei rock marks the narrowest part of the river in the Rhine gorge, which creates a strong current that caused many boats to founder on the rocks below the waterline.
Tienie’s Lorelei is not part of the physical world. She is unreachable and unattainably captured in her own spiritual realm. Her harp, fashioned in the image of a dragon, has a life of its own and her hair merges into a snake at the tips. The dragon and the snake are her consorts, protecting her from any intrusion into their other-world. The Lorelei is the embodiment of man’s deep yearning for something inexplicable and incomprehensible to fill the emptiness of existence. It is a forbidden longing, because it leads astray.
In 1824 Heinrich Heine wrote his famous poem entitled Die Lorelei. It tells the story of a siren who, while combing her golden hair and singing hauntingly beautiful, unwittingly distracted shipmen with her beauty and song and caused them to crash on the rocks. The lyrics of the poem were set to music by Friedrich Silcher and the song became popular German culture.