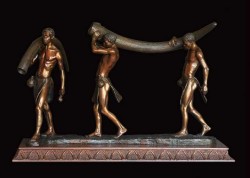 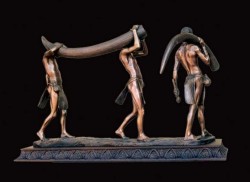 This sculpture was the result of Tienie’s love for everything pertaining to Africa. It forms part of a recurring theme in Tienie’s work – the interdependency and interconnectedness between man and animal. During the 19th century, the ivory trade blossomed and more and more elephants were hunted by professional hunters in the interior of the African bush. A growing demand arose for reliable porters to carry the ivory from the interior to the port of Zanzibar where it was auctioned and shipped to various parts of the world. Such demands were met at the turn of the 19th century by the Swahili tribes, descendants of the Arabs and Kikuyu tribe of Kenya. The Swahili porters depicted here were trained to carry the ivory for miles on end. During the short rest they were granted, the load was shifted in disciplined military style from the left to the right shoulder. The loincloths around their waists also served as sleeping mats during the night. They carried knob-kieries to protect themselves against wild animals.