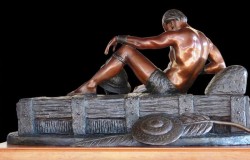 Gladiators (like the Hoplomachi depicted in this sculpture) were trained fighters whose combats, usually to the death, were scheduled events in big public arenas or amphitheatres throughout the ancient Roman Empire. Originating as funeral spectacles, it was seen as a demonstration of the power to overcome death. Victorious gladiators were rewarded with palm branches as trophies, money, fame and sometimes even freedom.
Tienie depicted the pathos of a victor who has fought the last battle and received his final palm branch, because he was mortally wounded. He achieved the ironic status of one who has succeeded in overcoming death, but pays with his life for his endeavour. Clutching his wound, he is contemplating his fate.