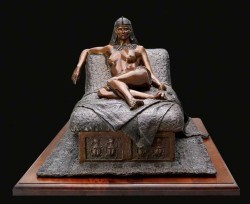 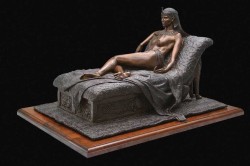 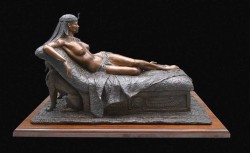 Bronze
Dimensions: 0,6m High x 0,6m x 1.1m
Edition: Series of Five
Fabled for her sexual allure and cunning intelligence, Cleopatra VII of Egypt has fascinated generations of admirers and detractors since her tumultuous life ended in suicide. She was born in 69 B.C. and was the last of the Ptolemaic monarchs who had ruled Egypt as Hellenistic Greek pharaohs for 300 years.Tienie portrayed Cleopatra as queen reclining on the royal sofa, protected by the wings of Isis, the principal goddess of ancient Egypt. The sacred scarabs, representing the sun god, roll the sun from East to West and back again, ensuring that it will rise again so that she may reign yet another day. The sphinxes at the back of the sofa are a fusion of ancient Greek and Egyptian cultures. Tienie used his artistic freedom to illustrate Cleopatra’s original Greek descent as well as her Egyptian heritage.

« Cheetahs On The Hunt Contentment »