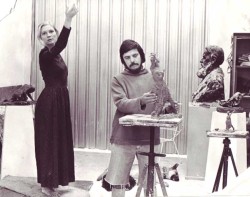 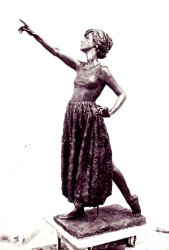 ‘N BEELD VIR JEANNIE – 1976
DIMENSIONS:  Life-size
Early in 1976 Tienie was approached by filmmaker Elmo De Witt and scriptwriter Jan Scholz to create sculptures for their new Afrikaans film ‘n Beeld  vir Jeannie     during the Anglo-Boer War.  The film portrayed a country community who commissioned a sculptor (played by Hans Strydom) to sculpt a figure of a Voortrekker girl to be erected  on the town square.  The sculpture was commissioned to commemorate the women who died in the concentration camps during the Anglo-Boer War.
The young student actress who played the role of Jeannie, Elize Lizamore, also posed for Tienie.  He sculpted a maquette, a portrait as well as a life size figure for the film. The life size figure  was only cast in plaster of Paris and although  Tienie  kept it for many years, he had to destroy it when he needed more space in his studio.  A limited series of the maquette was cast in bronze and it proved to be one of Tienie’s most popular works.  The portrait was also cast in bronze and was bought by the art museum in Polekwane.