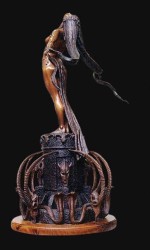 The novel She, by the author Ryder Haggard, inspired this sculpture. Ayesha, a former priestess of Isis in an Egyptian temple, received the gift of everlasting life from Isis, in return for services granted. She later became the queen and ruler of an African tribe.She is depicted while standing in the flames of the sacred fire that bestows everlasting life and youth and does not burn or scald. For this ritual she is standing on an altar that is adorned with a combination of Egyptian and ethnic African symbols. Her posture, bent over backwards, signifies a spiritual communication with a higher entity – she is receiving godly graces. Ayesha’s hair is very long and accentuated, like the description in the novel. She fastened it with a clip in the form of a two-headed snake, similar to the snakes on the altar.